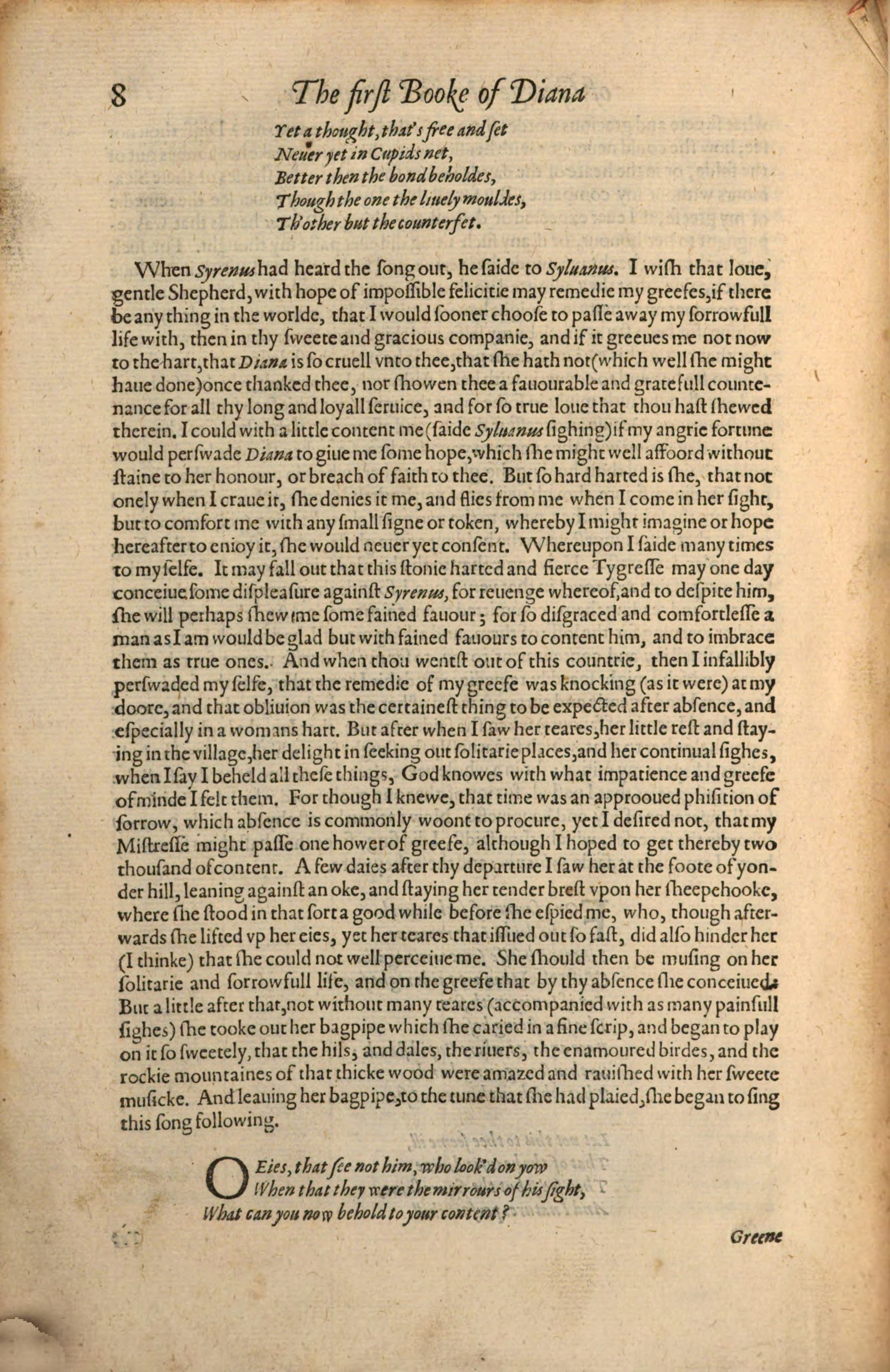 Yet a thought, thatâ€™s free and set
Neuer yet in Cupids net,
Better then the bond beholdes,
Though the one the liuely mouldes,
Thâ€™other but the counterfet.

When Syrenus had heard the song out, he saide to Syluanus. I wish that loue, gentle Shepherd, with hope of impossible felicitie may remedie my greefes, if there be any thing in the worlde, that I would sooner choose to passe away my sorrowfull life with, then in thy sweete and gracious companie, and if it greeues me not now to the hart, that Diana is so cruell vnto thee, that she hath not (which well she might haue done) once thanked thee, nor showen thee a fauourable and gratefull counteâˆ£nance for all thy long and loyall seruice, and for so true loue that thou hast shewed therein. I could with a little content me (saide Syluanus sighing) if my angrie fortune would perswade Diana to giue me some hope, which she might well affoord without staine to her honour, or breach of faith to thee. But so hard harted is she, that not onely when I craue it, she denies it me, and flies from me when I come in her sight, but to comfort me with any small signe or token, whereby I might imagine or hope hereafter to enioy it, she would neuer yet consent. Whereupon I saide many times to my selfe. It may fall out that this stonie harted and fierce Tygresse may one day conceiue some displeasure against Syrenus, for reuenge whereof, and to despite him, she will perhaps shew me some fained fauour; for so disgraced and comfortlesse a man as I am would be glad but with fained fauours to content him, and to imbrace them as true ones. And when thou wentst out of this countrie, then I infallibly perswaded my selfe, that the remedie of my greefe was knocking (as it were) at my doore, and that obliuion was the certainest thing to be expected after absence, and especially in a womans hart. But after when I saw her teares, her little rest and stayâˆ£ing in the village, her delight in seeking out solitarie places, and her continual sighes, when I say I beheld all these things, God knowes with what impatience and greefe of minde I felt them. For though I knewe, that time was an approoued phisition of sorrow, which absence is commonly woont to procure, yet I desired not, that my Mistresse might passe one hower of greefe, although I hoped to get thereby two thousand of content. A few daies after thy departure I saw her at the foote of yonâˆ£der hill, leaning against an oke, and staying her tender brest vpon her sheepehooke, where she stood in that sort a good while before she espied me, who, though afterâˆ£wards she lifted vp her eies, yet her teares that issued out so fast, did also hinder her (I thinke) that she could not well perceiue me. She should then be musing on her solitarie and sorrowfull life, and on the greefe that by thy absence she conceiued: But a little after that, not without many teares (accompanied with as many painfull sighes) she tooke out her bagpipe which she caried in a fine scrip, and began to play on it so sweetely, that the hils, and dales, the riuers, the enamoured birdes, and the rockie mountaines of that thicke wood were amazed and rauished with her sweete musicke. And leauing her bagpipe, to the tune that she had plaied, she began to sing this song following.

O Eies, that see not him, who lookâ€™d on yow
When that they were the mirrours of his sight,
What can you now behold to your content?