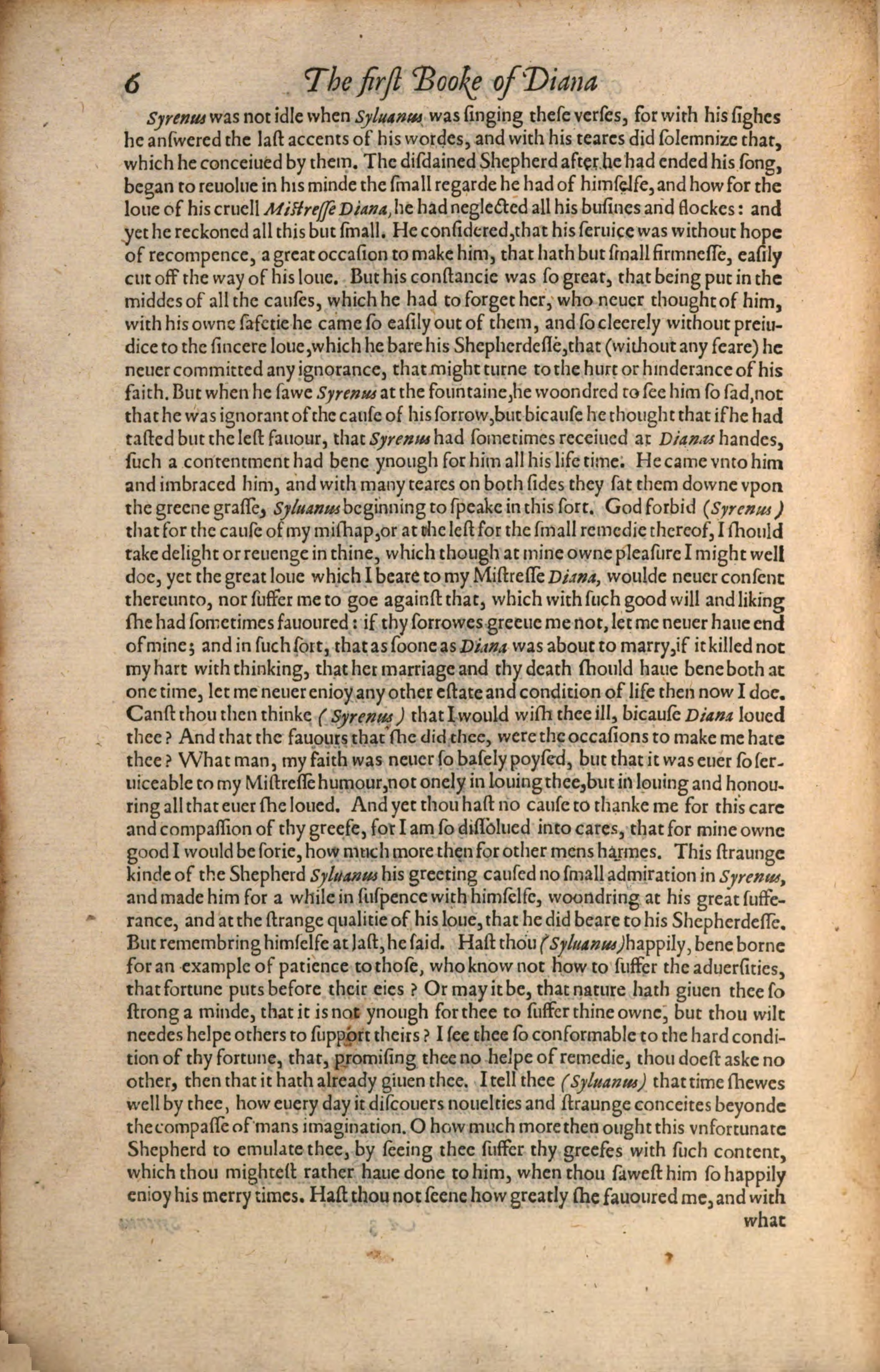 Syrenus was not idle when Syluanus was singing these verses, for with his sighes he answered the last accents of his wordes, and with his teares did solemnize that, which he conceiued by them. The disdained Shepherd after he had ended his song, began to reuolue in his minde the small regarde he had of himselfe, and how for the loue of his cruell Mistresse Diana, he had neglected all his busines and flockes: and yet he reckoned all this but small. He considered, that his seruice was without hope of recompence, a great occasion to make him, that hath but small firmnesse, easily cut off the way of his loue. But his constancie was so great, that being put in the middes of all the causes, which he had to forget her, who neuer thought of him, with his owne safetie he came so easily out of them, and so cleerely without preiuâˆ£dice to the sincere loue, which he bare his Shepherdesse, that (without any feare) he neuer committed any ignorance, that might turne to the hurt or hinderance of his faith. But when he sawe Syrenus at the fountaine, he woondred to see him so sad, not that he was ignorant of the cause of his sorrow, but bicause he thought that if he had tasted but the lest fauour, that Syrenus had sometimes receiued at Dianas handes, such a contentment had bene ynough for him all his life time. He came vnto him and imbraced him, and with many teares on both sides they sat them downe vpon the greene grasse, Syluanus beginning to speake in this sort. God forbid (Syrenus) that for the cause of my mishap, or at the lest for the small remedie thereof, I should take delight or reuenge in thine, which though at mine owne pleasure I might well doe, yet the great loue which I beare to my Mistresse Diana, woulde neuer consent thereunto, nor suffer me to goe against that, which with such good will and liking she had sometimes fauoured: if thy sorrowes greeue me not, let me neuer haue end of mine; and in such sort, that as soone as Diana was about to marry, if it killed not my hart with thinking, that her marriage and thy death should haue bene both at one time, let me neuer enioy any other estate and condition of life then now I doe. Canst thou then thinke (Syrenus) that I would wish thee ill, bicause Diana loued thee? And that the fauours that she did thee, were the occasions to make me hate thee? What man, my faith was neuer so basely poysed, but that it was euer so serâˆ£uiceable to my Mistresse humour, not onely in louing thee, but in louing and honouâˆ£ring all that euer she loued. And yet thou hast no cause to thanke me for this care and compassion of thy greefe, for I am so dissolued into cares, that for mine owne good I would be sorie, how much more then for other mens harmes. This straunge kinde of the Shepherd Syluanus his greeting caused no small admiration in Syrenus, and made him for a while in suspence with himselfe, woondring at his great suffeâˆ£rance, and at the strange qualitie of his loue, that he did beare to his Shepherdesse. But remembring himselfe at last, he said. Hast thou (Syluanus) happily, bene borne for an example of patience to those, who know not how to suffer the aduersities, that fortune puts before their eies? Or may it be, that nature hath giuen thee so strong a minde, that it is not ynough for thee to suffer thine owne, but thou wilt needes helpe others to support theirs? I see thee so conformable to the hard condiâˆ£tion of thy fortune, that, promising thee no helpe of remedie, thou doest aske no other, then that it hath already giuen thee. I tell thee (Syluanus) that time shewes well by thee, how euery day it discouers nouelties and straunge conceites beyonde the compasse of mans imagination. O how much more then ought this vnfortunate Shepherd to emulate thee, by seeing thee suffer thy greefes with such content, which thou mightest rather haue done to him, when thou sawest him so happily enioy his merry times. Hast thou not seene how greatly she fauoured me, and with