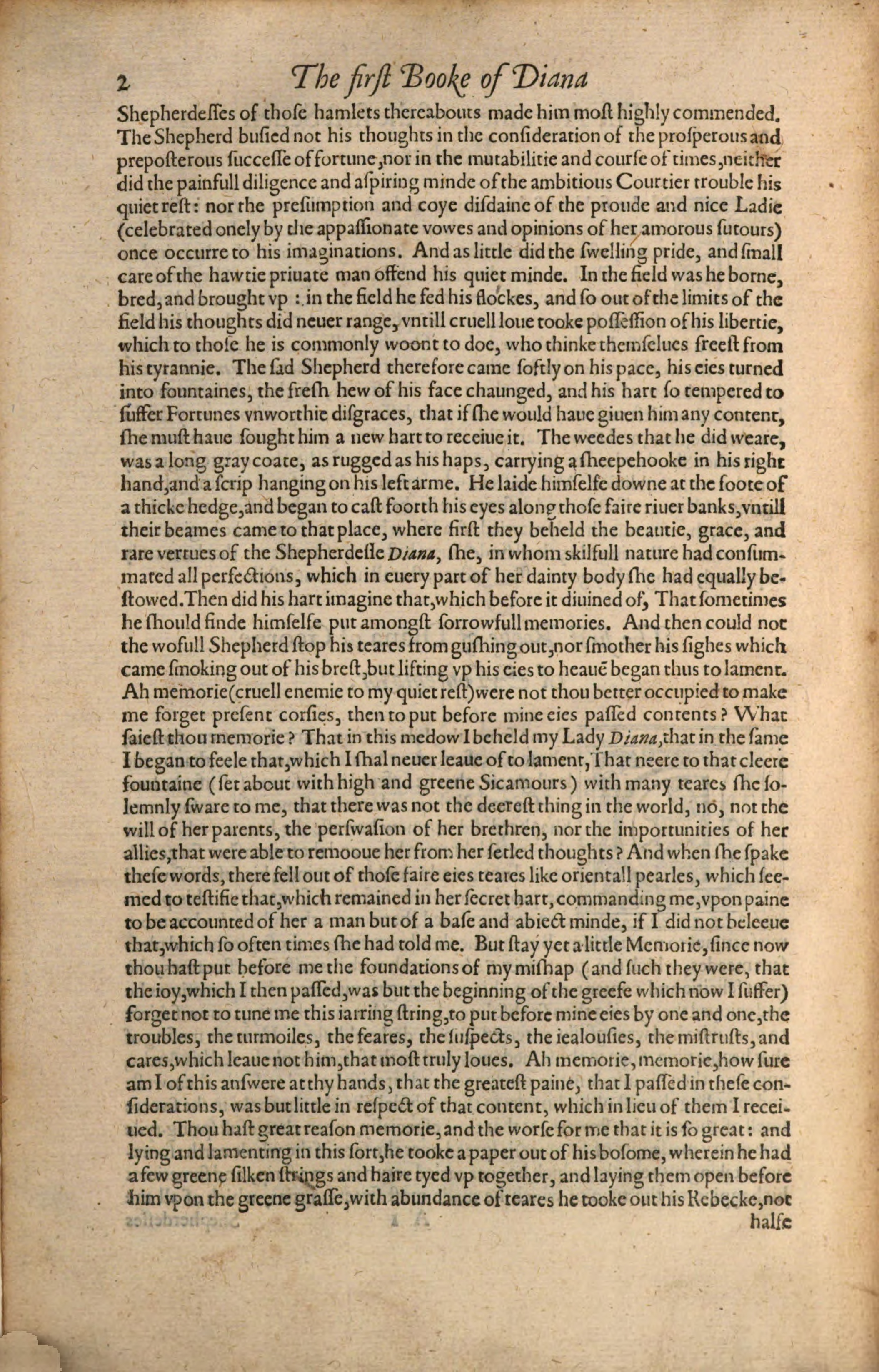 Shepherdesses of those hamlets thereabouts made him most highly commended. The Shepherd busied not his thoughts in the consideration of the prosperous and preposterous successe of fortune, nor in the mutabilitie and course of times, neither did the painfull diligence and aspiring minde of the ambitious Courtier trouble his quiet rest: nor the presumption and coye disdaine of the proude and nice Ladie (celebrated onely by the appassionate vowes and opinions of her amorous sutours) once occurre to his imaginations. And as little did the swelling pride, and small care of the hawtie priuate man offend his quiet minde. In the field was he borne, bred, and brought vp: in the field he fed his flockes, and so out of the limits of the field his thoughts did neuer range, vntill cruell loue tooke possession of his libertie, which to those he is commonly woont to doe, who thinke themselues freest from his tyrannie. The sad Shepherd therefore came softly on his pace, his eies turned into fountaines, the fresh hew of his face chaunged, and his hart so tempered to suffer Fortunes vnworthie disgraces, that if she would haue giuen him any content, she must haue sought him a new hart to receiue it. The weedes that he did weare, was a long gray coate, as rugged as his haps, carrying a sheepehooke in his right hand, and a scrip hanging on his left arme. He laide himselfe downe at the foote of a thicke hedge, and began to cast foorth his eyes along those faire riuer banks, vntill their beames came to that place, where first they beheld the beautie, grace, and rare vertues of the Shepherdesle Diana, she, in whom skilfull nature had consumâˆ£mated all perfections, which in euery part of her dainty body she had equally beâˆ£stowed. Then did his hart imagine that, which before it diuined of, That sometimes he should finde himselfe put amongst sorrowfull memories. And then could not the wofull Shepherd stop his teares from gushing out, nor smother his sighes which came smoking out of his brest, but lifting vp his eies to heaueÌ„ began thus to lament. Ah memorie (cruell enemie to my quiet rest) were not thou better occupied to make me forget present corsies, then to put before mine eies passed contents? What saiest thou memorie? That in this medow I beheld my Lady Diana, that in the same I began to feele that, which I shal neuer leaue of to lament, That neere to that cleere fountaine (set about with high and greene Sicamours) with many teares she soâˆ£lemnly sware to me, that there was not the deerest thing in the world, no, not the will of her parents, the perswasion of her brethren, nor the importunities of her allies, that were able to remooue her from her setled thoughts? And when she spake these words, there fell out of those faire eies teares like orientall pearles, which seeâˆ£med to testifie that, which remained in her secret hart, commanding me, vpon paine to be accounted of her a man but of a base and abiect minde, if I did not beleeue that, which so often times she had told me. But stay yet a little Memorie, since now thou hast put before me the foundations of my mishap (and such they were, that the ioy, which I then passed, was but the beginning of the greefe which now I suffer) forget not to tune me this iarring string, to put before mine eies by one and one, the troubles, the turmoiles, the feares, the suspects, the iealousies, the mistrusts, and cares, which leaue not him, that most truly loues. Ah memorie, memorie, how sure am I of this answere at thy hands, that the greatest paine, that I passed in these conâˆ£siderations, was but little in respect of that content, which in lieu of them I receiâˆ£ued. Thou hast great reason memorie, and the worse for me that it is so great: and lying and lamenting in this sort, he tooke a paper out of his bosome, wherein he had a few greene silken strings and haire tyed vp together, and laying them open before him vpon the greene grasse, with abundance of teares he tooke out his Rebecke, not