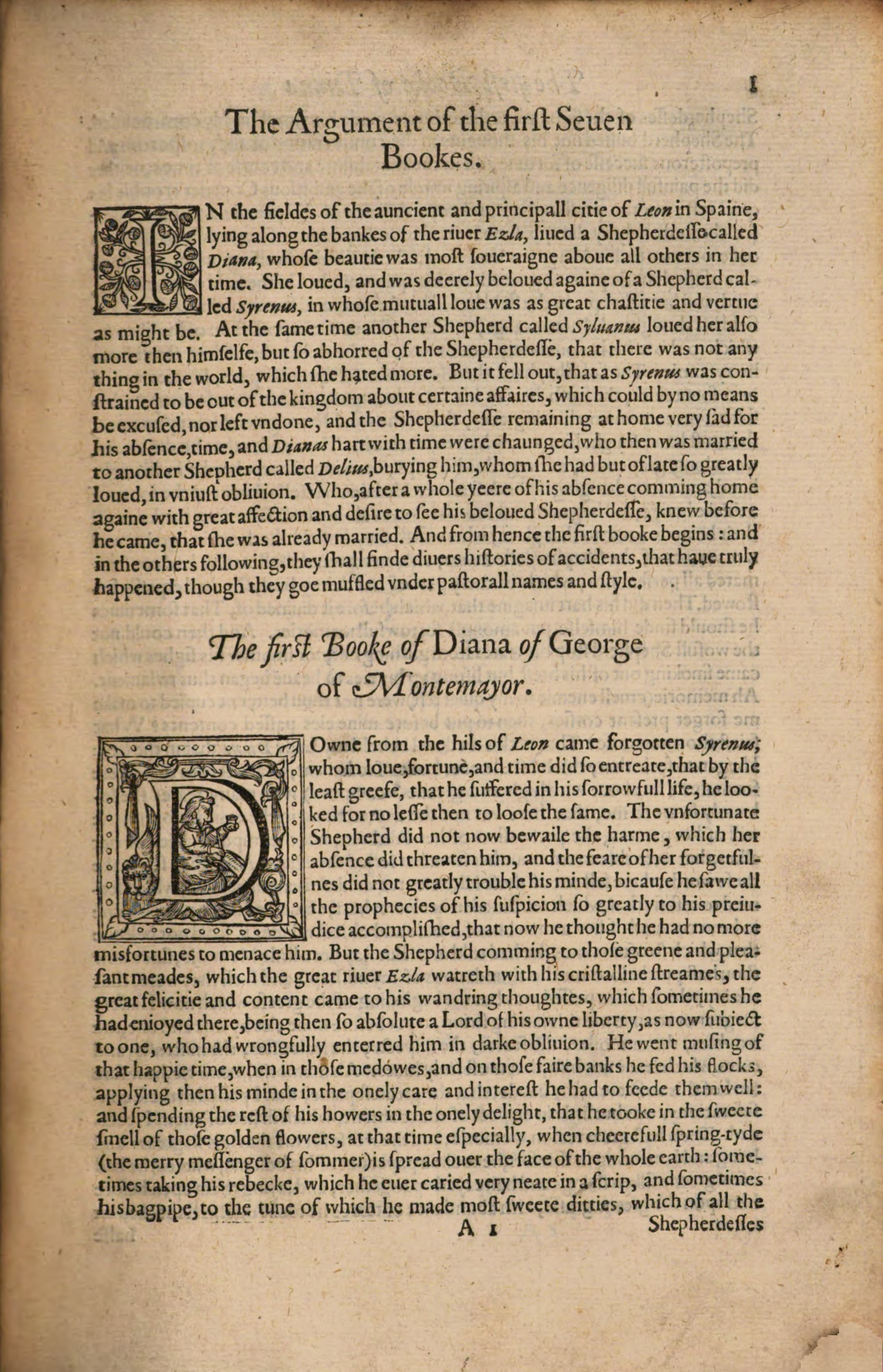 The Argument of the first Seuen
Bookes.

IN the fieldes of the auncient and principall citie of Leon in Spaine, lying along the bankes of the riuer Ezla, liued a Shepherdesse called Diana, whose beautie was most soueraigne aboue all others in her time. She loued, and was deerely beloued againe of a Shepherd calâˆ£led Syrenus, in whose mutuall loue was as great chastitie and vertue as might be. At the same time another Shepherd called Syluanus loued her also more then himselfe, but so abhorred of the Shepherdesse, that there was not any thing in the world, which she hated more. But it fell out, that as Syrenus was conâˆ£strained to be out of the kingdom about certaine affaires, which could by no means be excused, nor left vndone, and the Shepherdesse remaining at home very sad for his absence, time, and Dianas hart with time were chaunged, who then was married to another Shepherd called Delius,burying him, whom she had but of late so greatly loued, in vniust obliuion. Who, after a whole yeere of his absence comming home againe with great affection and desire to see his beloued Shepherdesse, knew before he came, that she was already married. And from hence the first booke begins: and in the others following, they shall finde diuers histories of accidents, that haue truly happened, though they goe muffled vnder pastorall names and style.

The first Booke of Diana of George
of Montemayor.

DOwne from the hils of Leon came forgotten Syrenus, whom loue, fortune, and time did so entreate, that by the least greefe, that he suffered in his sorrowfull life, he looâˆ£ked for no lesse then to loose the same. The vnfortunate Shepherd did not now bewaile the harme, which her absence did threaten him, and the feare of her forgetfulâˆ£nes did not greatly trouble his minde, bicause he sawe all the prophecies of his suspicion so greatly to his preiuâˆ£dice accomplished, that now he thought he had no more misfortunes to menace him. But the Shepherd comming to those greene and pleaâˆ£sant meades, which the great riuer Ezla watreth with his cristalline streames, the great felicitie and content came to his wandring thoughtes, which sometimes he had enioyed there, being then so absolute a Lord of his owne liberty, as now subiect to one, who had wrongfully enterred him in darke obliuion. He went musing of that happie time, when in those medowes, and on those faire banks he fed his flocks, applying then his minde in the onely care and interest he had to feede them well: and spending the rest of his howers in the onely delight, that he tooke in the sweete smell of those golden flowers, at that time especially, when cheerefull spring-tyde (the merry messenger of sommer) is spread ouer the face of the whole earth: someâˆ£times taking his rebecke, which he euer caried very neate in a scrip, and sometimes his bagpipe, to the tune of which he made most sweete ditties, which of all the