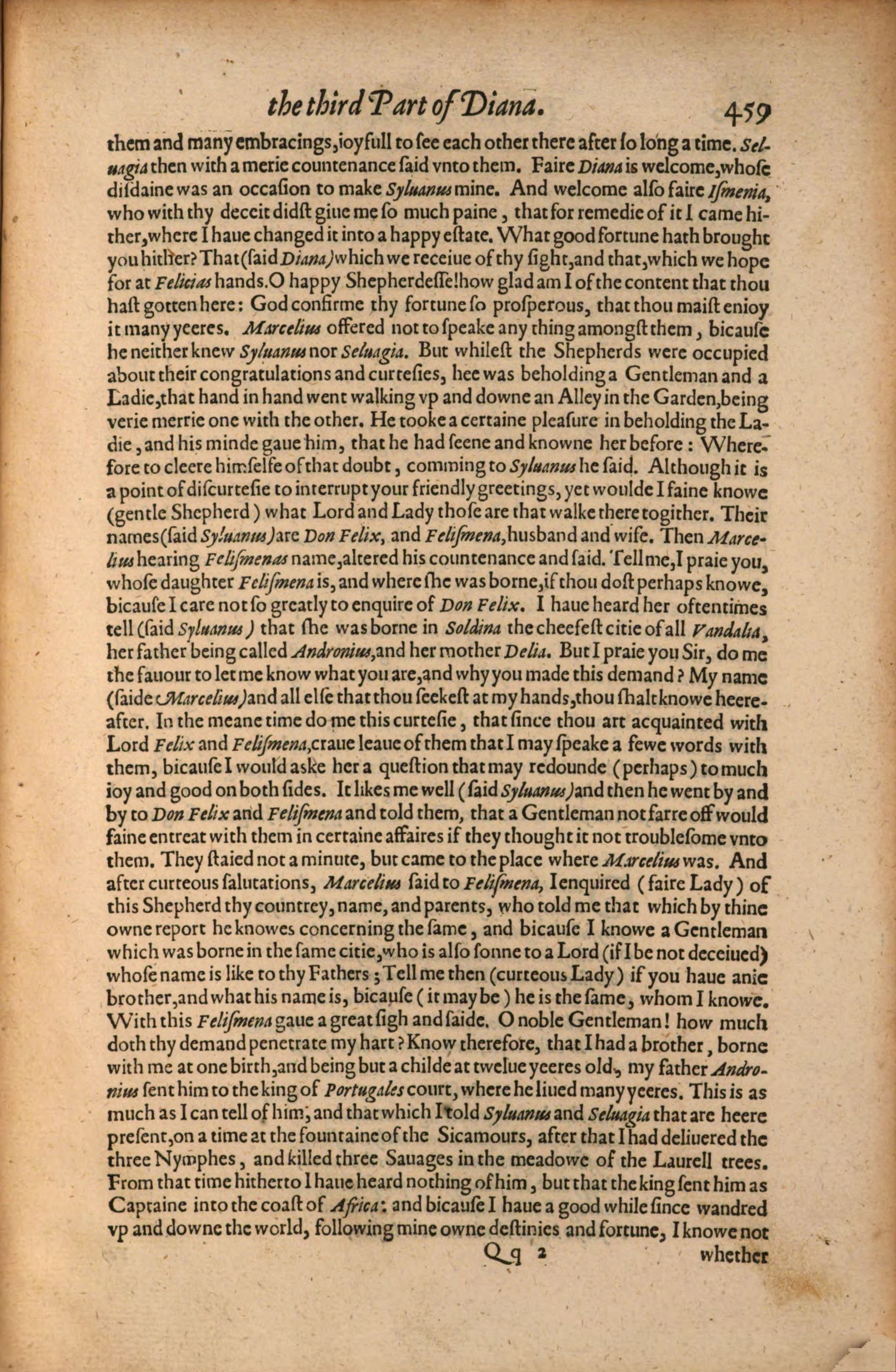 them and many embracings, ioyfull to see each other there after so long a time. Selâˆ£uagia then with a merie countenance said vnto them. Faire Diana is welcome, whose disdaine was an occasion to make Syluanus mine. And welcome also faire Ismenia, who with thy deceit didst giue me so much paine, that for remedie of it I came hiâˆ£ther, where I haue changed it into a happy estate. What good fortune hath brought you hither? That (said Diana) which we receiue of thy sight, and that, which we hope for at Felicias hands. O happy Shepherdesse! how glad am I of the content that thou hast gotten here: God confirme thy fortune so prosperous, that thou maist enioy it many yeeres. Marcelius offered not to speake any thing amongst them, bicause he neither knew Syluanus nor Seluagia. But whilest the Shepherds were occupied about their congratulations and curtesies, hee was beholding a Gentleman and a Ladie, that hand in hand went walking vp and downe an Alley in the Garden, being verie merrie one with the other. He tooke a certaine pleasure in beholding the Laâˆ£die, and his minde gaue him, that he had seene and knowne her before: Whereâˆ£fore to cleere himselfe of that doubt, comming to Syluanus he said. Although it is a point of discurtesie to interrupt your friendly greetings, yet woulde I faine knowe (gentle Shepherd) what Lord and Lady those are that walke there togither. Their names (said Syluanus) are Don Felix, and Felismena, husband and wife. Then Marceâˆ£lius hearing Felismenas name, altered his countenance and said. Tell me, I praie you, whose daughter Felismena is, and where she was borne, if thou dost perhaps knowe, bicause I care not so greatly to enquire of Don Felix. I haue heard her oftentimes tell (said Syluanus) that she was borne in Soldina the cheefest citie of all Vandalia, her father being called Andronius, and her mother Delia. But I praie you Sir, do me the fauour to let me know what you are, and why you made this demand? My name (saide Marcelius) and all else that thou seekest at my hands, thou shalt knowe heereâˆ£after. In the meane time do me this curtesie, that since thou art acquainted with Lord Felix and Felismena, craue leaue of them that I may speake a fewe words with them, bicause I would aske her a question that may redounde (perhaps) to much ioy and good on both sides. It likes me well (said Syluanus) and then he went by and by to Don Felix and Felismena and told them, that a Gentleman not farre off would faine entreat with them in certaine affaires if they thought it not troublesome vnto them. They staied not a minute, but came to the place where Marcelius was. And after curteous salutations, Marcelius said to Felismena, I enquired (faire Lady) of this Shepherd thy countrey, name, and parents, who told me that which by thine owne report he knowes concerning the same, and bicause I knowe a Gentleman which was borne in the same citie, who is also sonne to a Lord (if I be not deceiued) whose name is like to thy Fathers; Tell me then (curteous Lady) if you haue anie brother, and what his name is, bicause (it may be) he is the same, whom I knowe. With this Felismena gaue a great sigh and saide. O noble Gentleman! how much doth thy demand penetrate my hart? Know therefore, that I had a brother, borne with me at one birth, and being but a childe at twelue yeeres old, my father Androâˆ£nius sent him to the king of Portugales court, where he liued many yeeres. This is as much as I can tell of him, and that which I told Syluanus and Seluagia that are heere present, on a time at the fountaine of the Sicamours, after that I had deliuered the three Nymphes, and killed three Sauages in the meadowe of the Laurell trees. From that time hitherto I haue heard nothing of him, but that the king sent him as Captaine into the coast of Africa: and bicause I haue a good while since wandred vp and downe the world, following mine owne destinies and fortune, I knowe not