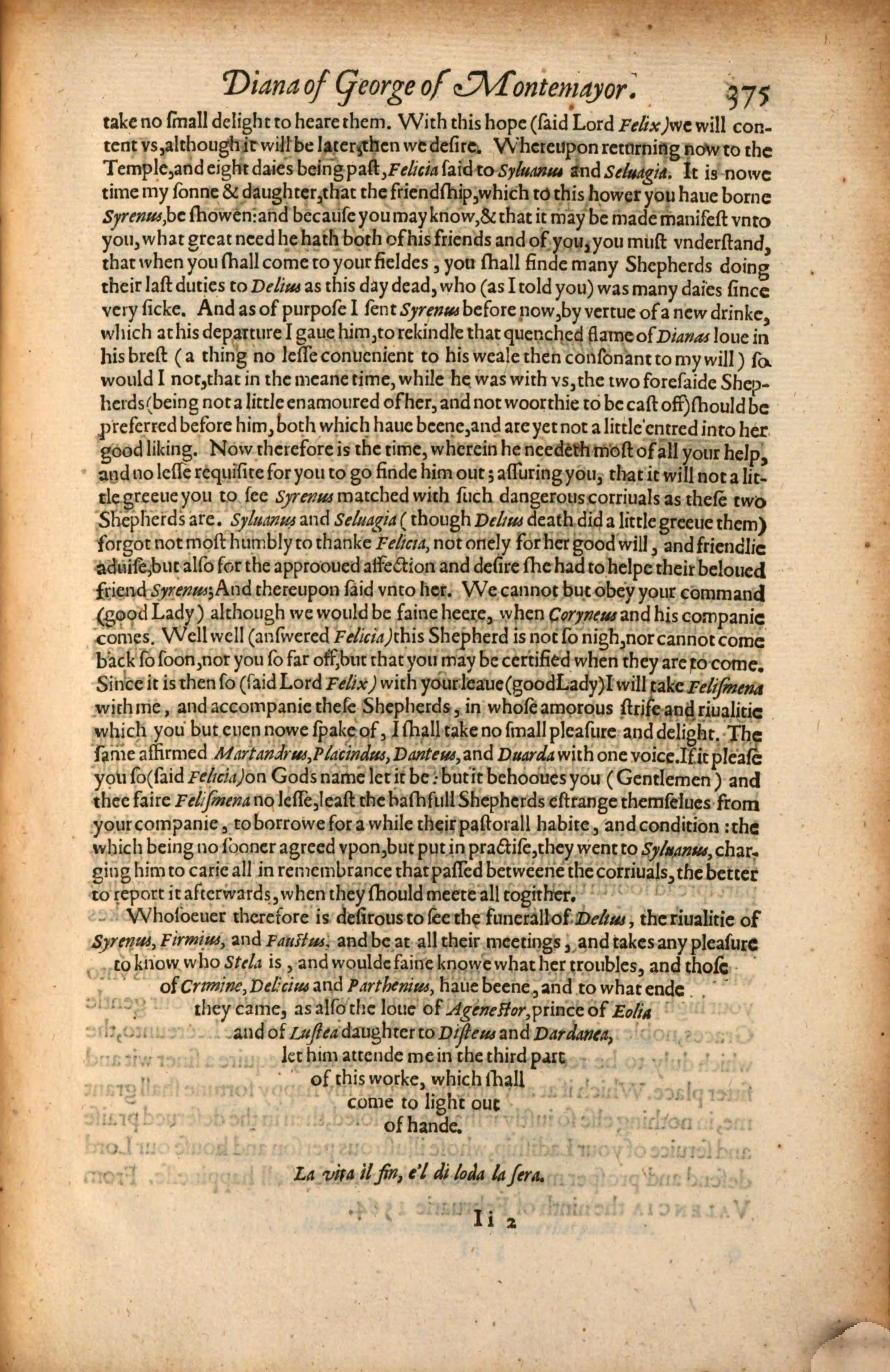 take no small delight to heare them. With this hope (said Lord Felix) we will conâˆ£tent vs, although it will be later, then we desire. Whereupon returning now to the Temple, and eight daies being past, Felicia said to Syluanus and Seluagia. It is nowe time my sonne & daughter, that the friendship, which to this hower you haue borne Syrenus, be showen: and because you may know, & that it may be made manifest vnto you, what great need he hath both of his friends and of you, you must vnderstand, that when you shall come to your fieldes, you shall finde many Shepherds doing their last duties to Delius as this day dead, who (as I told you) was many daies since very sicke. And as of purpose I sent Syrenus before now, by vertue of a new drinke, which at his departure I gaue him, to rekindle that quenched flame of Dianas loue in his brest (a thing no lesse conuenient to his weale then consonant to my will) so would I not, that in the meane time, while he was with vs, the two foresaide Shepâˆ£herds (being not a little enamoured of her, and not woorthie to be cast off) should be preferred before him, both which haue beene, and are yet not a little entred into her good liking. Now therefore is the time, wherein he needeth most of all your help, and no lesse requisite for you to go finde him out; assuring you, that it will not a litâˆ£tle greeue you to see Syrenus matched with such dangerous corriuals as these two Shepherds are. Syluanus and Seluagia (though Delius death did a little greeue them) forgot not most humbly to thanke Felicia, not onely for her good will, and friendlie aduise, but also for the approoued affection and desire she had to helpe their beloued friend Syrenus; And thereupon said vnto her. We cannot but obey your command (good Lady) although we would be faine heere, when Coryneus and his companie comes. Well well (answered Felicia) this Shepherd is not so nigh, nor cannot come back so soon, nor you so far off, but that you may be certified when they are to come. Since it is then so (said Lord Felix) with your leaue (good Lady) I will take Felismena with me, and accompanie these Shepherds, in whose amorous strife and riualitie which you but euen nowe spake of, I shall take no small pleasure and delight. The same affirmed Martandrus, Placindus, Danteus, and Duarda with one voice. If it please you so (said Felicia) on Gods name let it be: but it behooues you (Gentlemen) and thee faire Felismena no lesse, least the bashfull Shepherds estrange themselues from your companie, to borrowe for a while their pastorall habite, and condition: the which being no sooner agreed vpon, but put in practise, they went to Syluanus, charâˆ£ging him to carie all in remembrance that passed betweene the corriuals, the better to report it afterwards, when they should meete all togither.
Whosoeuer therefore is desirous to see the funerall of Delius, the riualitie of
Syrenus, Firmius, and Faustus, and be at all their meetings, and takes any pleasure
to know who Stela is, and woulde faine knowe what her troubles, and those
of Crimine, Delicius and Parthenius, haue beene, and to what ende
they came, as also the loue of Agenestor, prince of Eolia
and of Lustea daughter to Disteus and Dardanea,
let him attende me in the third part
of this worke, which shall
come to light out
of hande.