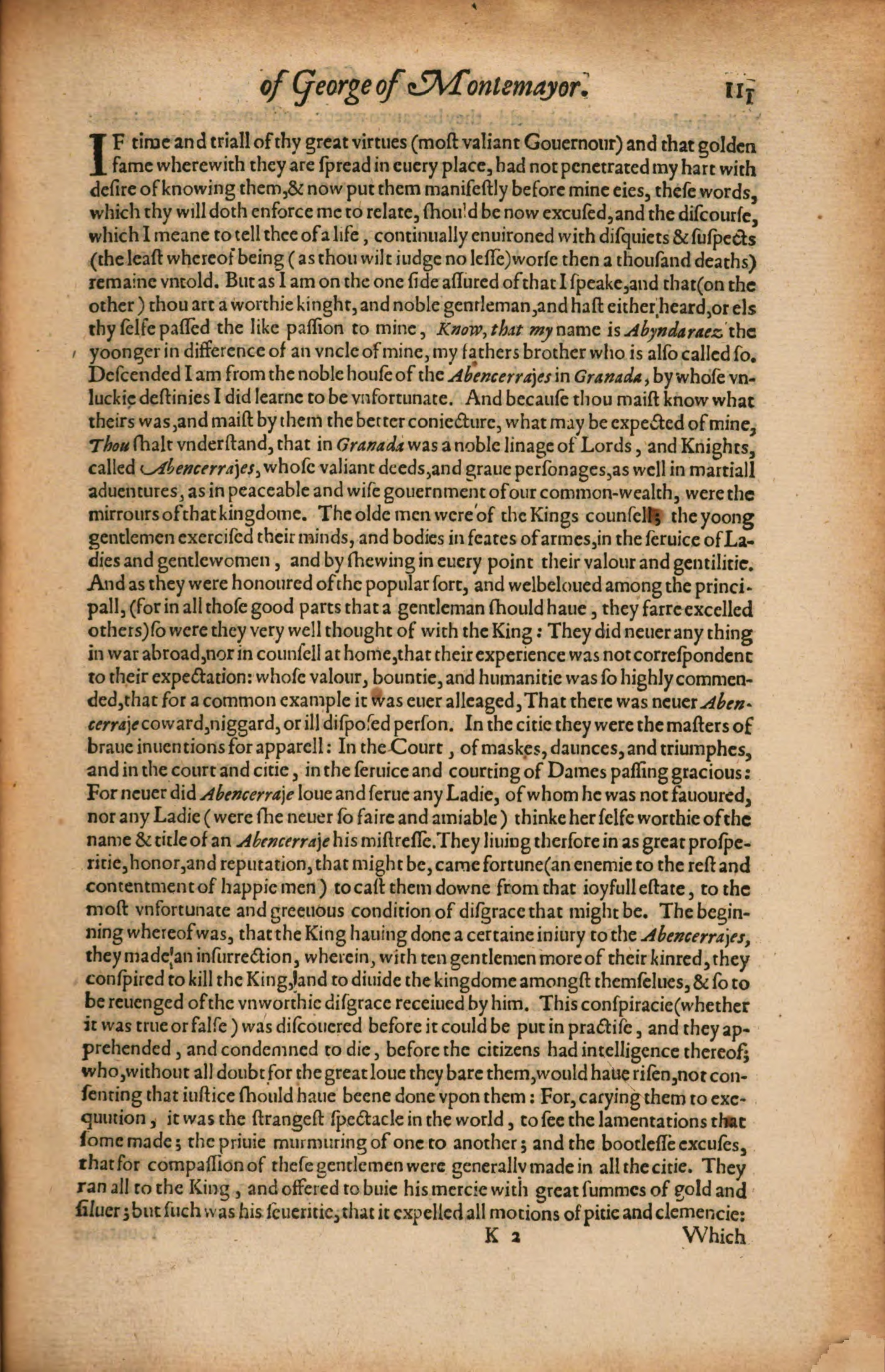 IF time and triall of thy great virtues (most valiant Gouernour) and that golden fame wherewith they are spread in euery place, had not penetrated my hart with desire of knowing them, & now put them manifestly before mine eles, these words, which thy will doth enforce me to relate, should be now excused, and the discourse, which I meane to tell thee of a life, continually enuironed with disquiets & suspects (the least whereof being (as thou wilt iudge no lesse) worse then a thousand deaths) remaine vntold. But as I am on the one side assured of that I speake, and that (on the other) thou art a worthie kinght, and noble gentleman, and hast either heard, or els thy selfe passed the like passion to mine, Know, that my name is Abyndaraez the yoonger in difference of an vncle of mine, my fathers brother who is also called so. Descended I am from the noble house of the Abencerrajes in Granada, by whose vnâˆ£luckie destinies I did learne to be vnfortunate. And because thou maist know what theirs was, and maist by them the better coniecture, what may be expected of mine, Thou shalt vnderstand, that in Granada was a noble linage of Lords, and Knights, called Abencerrajes, whose valiant deeds, and graue personages, as well in martiall aduentures, as in peaceable and wise gouernment of our common-wealth, were the mirrours of that kingdome. The olde men were of the Kings counsell; the yoong gentlemen exercised their minds, and bodies in feates of armes, in the seruice of Laâˆ£dies and gentlewomen, and by shewing in euery point their valour and gentilitie. And as they were honoured of the popular sort, and welbeloued among the princiâˆ£pall, (for in all those good parts that a gentleman should haue, they farre excelled others) so were they very well thought of with the King: They did neuer any thing in war abroad, nor in counsell at home, that their experience was not correspondent to their expectation: whose valour, bountie, and humanitie was so highly commenâˆ£ded, that for a common example it was euer alleaged, That there was neuer Abenâˆ£cerraje coward, niggard, or ill disposed person. In the citie they were the masters of braue inuentions for apparell: In the Court, of maskes, daunces, and triumphes, and in the court and citie, in the seruice and courting of Dames passing gracious: For neuer did Abencerraje loue and serue any Ladie, of whom he was not fauoured, nor any Ladie (were she neuer so faire and amiable) thinke her selfe worthie of the name & title of an Abencerraje his mistresse. They liuing therfore in as great prospeâˆ£ritie, honor, and reputation, that might be, came fortune (an enemie to the rest and contentment of happie men) to cast them downe from that ioyfull estate, to the most vnfortunate and greeuous condition of disgrace that might be. The beginâˆ£ning whereof was, that the King hauing done a certaine iniury to the Abencerrajes, they made an insurrection, wherein, with ten gentlemen more of their kinred, they conspired to kill the King, land to diuide the kingdome amongst themselues, & so to be reuenged of the vnworthie disgrace receiued by him. This conspitacie (whether it was true or false) was discouered before it could be put in practise, and they apâˆ£prehended, and condemned to die, before the citizens had intelligence thereof; who, without all doubt for the great loue they bare them, would haue risen, not conâˆ£senting that iustice should haue beene done vpon them; For, carying them to exeâˆ£quution, it was the strangest spectacle in the world, to see the lamentations that some made; the priuie murmuring of one to another; and the bootlesse excuses, that for compassion of these gentlemen were generally made in all the citie. They ran all to the King, and offered to buie his mercie with great summes of gold and siluer; but such was his seueritie, that it expelled all motions of pitie and clemencie: