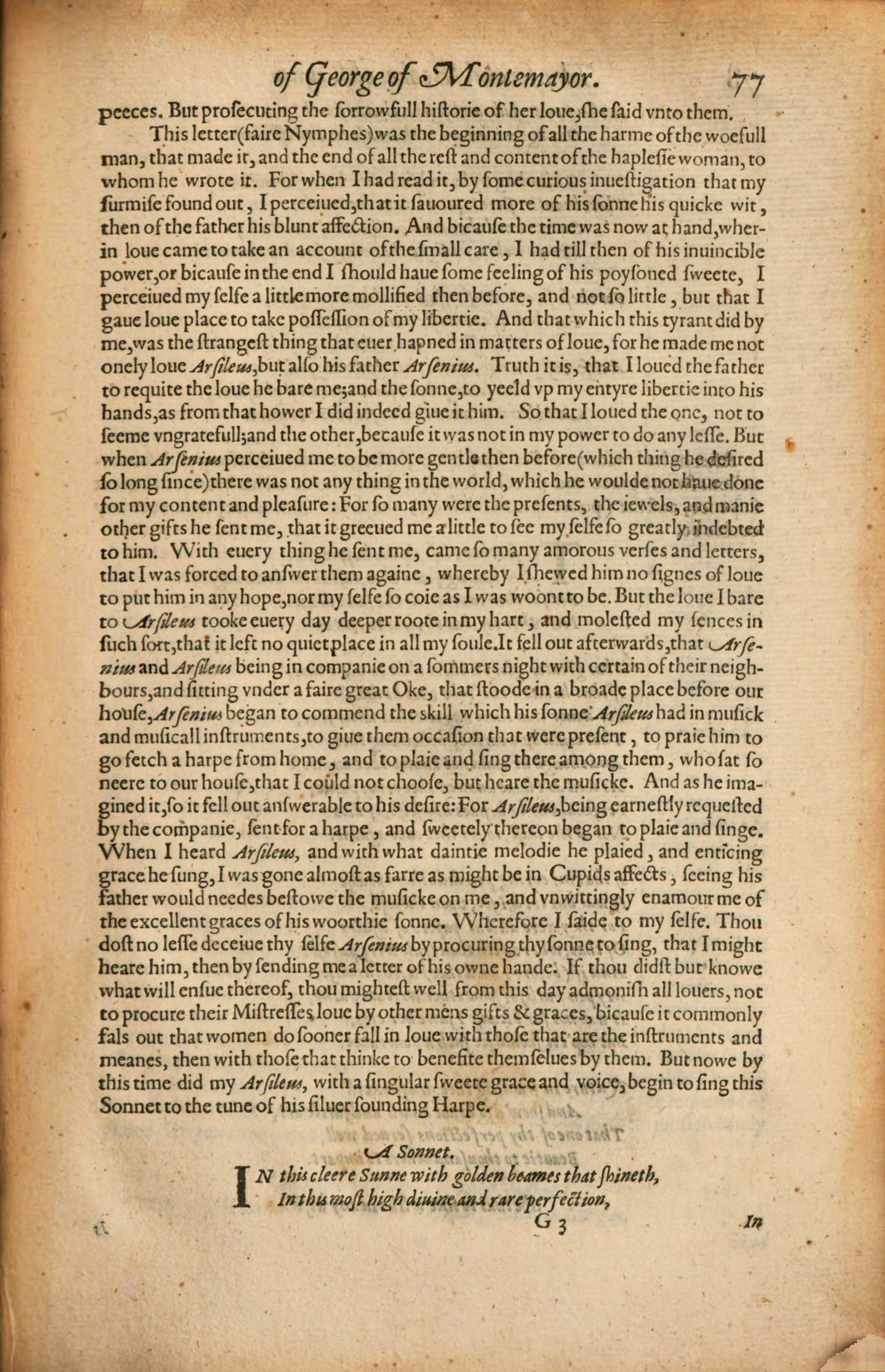 peeces. But prosecuting the sorrowfull historie of her loue, she said vnto them.
This letter (faire Nymphes) was the beginning of all the harme of the woefull
man, that made it, and the end of all the rest and content of the haplesse woman, to
whom he wrote it. For when I had read it, by some curious inuestigation that my
surmise found out, I perceiued, that it sauoured more of his sonne his quicke wit,
then of the father his blunt affection. And bicause the time was now at hand, wherâˆ£
in loue came to take an account of the small care, I had till then of his inuincible
power, or bicause in the end I should haue some feeling of his poysoned sweete, I
perceiued my selfe a little more mollified then before, and not so little, but that I
gaue loue place to take possession of my libertie. And that which this tyrant did by
me, was the strangest thing that euer hapned in matters of loue, for he made me not
onely loue Arsileus, but also his father Arsenius. Truth it is, that I loued the father
to requite the loue he bare me; and the sonne, to yeeld vp my entyre libertie into his
hands, as from that hower I did indeed giue it him. So that I loued the one, not to
seeme vngratefull; and the other, because it was not in my power to do any lesse. But
when Arsenius perceiued me to be more gentle then before (which thing he desired
so long since) there was not any thing in the world, which he woulde not haue done
for my content and pleasure: For so many were the presents, the iewels, and manie
other gifts he sent me, that it greeued me a little to see my selfe so greatly indebted
to him. With euery thing he sent me, came so many amorous verses and letters,
that I was forced to answer them againe, whereby I shewed him no signes of loue
to put him in any hope, nor my selfe so coie as I was woont to be. But the loue I bare
to Arsileus tooke euery day deeper roote in my hart, and molested my sences in
such sort, that it left no quiet place in all my soule. It fell out afterwards, that Arseâˆ£
nius and Arsileus being in companie on a sommers night with certain of their neighâˆ£bours, and sitting vnder a faire great Oke, that stoode in a broade place before our house, Arsenius began to commend the skill which his sonne Arsileus had in musick and musicall instruments, to giue them occasion that were present, to praie him to go fetch a harpe from home, and to plaie and sing there among them, who sat so neere to our house, that I could not choose, but heare the musicke. And as he imaâˆ£gined it, so it fell out answerable to his desire: For Arsileus, being earnestly requested by the companie, sent for a harpe, and sweetely thereon began to plaie and singe. When I heard Arsileus, and with what daintie melodie he plaied, and enticing grace he sung, I was gone almost as farre as might be in Cupids affects, seeing his father would needes bestowe the musicke on me, and vnwittingly enamour me of the excellent graces of his woorthie sonne. Wherefore I saide to my selfe. Thou dost no lesse deceiue thy selfe Arsenius by procuring thy sonne to sing, that I might heare him, then by sending me a letter of his owne hande. If thou didst but knowe what will ensue thereof, thou mightest well from this day admonish all louers, not to procure their Mistresses loue by other mens gifts & graces, bicause it commonly fals out that women do sooner fall in loue with those that are the instruments and meanes, then with those that thinke to benefite themselues by them. But nowe by this time did my Arsileus, with a singular sweete grace and voice, begin to sing this Sonnet to the tune of his siluer sounding Harpe.

IN this cleere Sunne with golden beames that shineth,
In thu most high diuine and rare perfection,