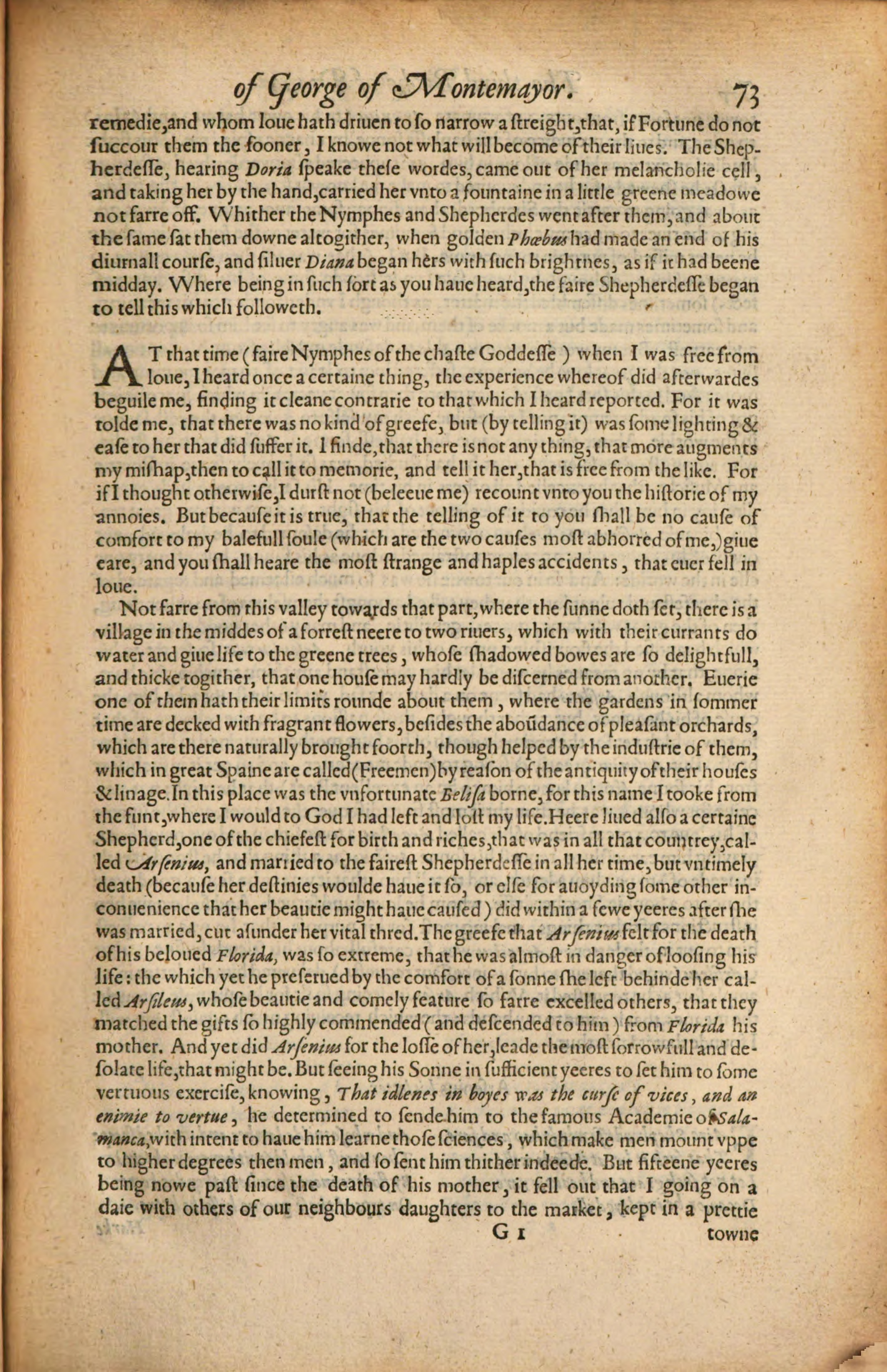 remedie, and whom loue hath driuen to so narrow a streight, that, if Fortune do not succour them the sooner, I knowe not what will become of their liues. The Shepâˆ£herdesse, hearing Doria speake these wordes, came out of her melancholie cell, and taking her by the hand, carried her vnto a fountaine in a little greene meadowe not farre off. Whither the Nymphes and Shepherdes went after them, and about the same sat them downe altogither, when golden Phoebus had made an end of his diurnall course, and siluer Diana began hers with such brightnes, as if it had beene midday. Where being in such sort as you haue heard, the faire Shepherdesse began to tell this which followeth.

AT that time (faire Nymphes of the chaste Goddesse) when I was free from loue, I heard once a certaine thing, the experience whereof did afterwardes beguile me, finding it cleane contrarie to that which I heard reported. For it was tolde me, that there was no kind of greefe, but (by telling it) was some lighting & ease to her that did suffer it. I finde, that there is not any thing, that more augments my mishap, then to call it to memorie, and tell it her, that is free from the like. For if I thought otherwise, I durst not (beleeue me) recount vnto you the historie of my annoies. But because it is true, that the telling of it to you shall be no cause of comfort to my balefull soule (which are the two causes most abhorred of me,) giue eare, and you shall heare the most strange and haples accidents, that euer fell in loue.
Not farre from this valley towards that part, where the sunne doth set, there is a village in the middes of a forrest neere to two riuers, which with their currants do water and giue life to the greene trees, whose shadowed bowes are so delightfull, and thicke togither, that one house may hardly be discerned from another. Euerie one of them hath their limits rounde about them, where the gardens in sommer time are decked with fragrant flowers, besides the abouÌ„dance of pleasant orchards, which are there naturally brought foorth, though helped by the industrie of them, which in great Spaine are called (Freemen) by reason of the antiquity of their houses & linage. In this place was the vnfortunate Belisa borne, for this name I tooke from the funt, where I would to God I had left and lost my life. Heere liued also a certaine Shepherd, one of the chiefest for birth and riches, that was in all that countrey, calâˆ£led Arsenius, and married to the fairest Shepherdesse in all her time, but vntimely death (because her destinies woulde haue it so, or else for auoyding some other in-conuenience that her beautie might haue caused) did within a fewe yeeres after she was married, cut asunder her vital thred. The greefe that Arsenius felt for the death of his beloued Florida, was so extreme, that he was almost in danger of loosing his life: the which yet he preserued by the comfort of a sonne she left behinde her calâˆ£led Arsileus, whose beautie and comely feature so farre excelled others, that they matched the gifts so highly commended (and descended to him) from Florida his mother. And yet did Arsenius for the losse of her, leade the most sorrowfull and deâˆ£solate life, that might be. But seeing his Sonne in sufficient yeeres to set him to some vertuous exercise, knowing, That idlenes in boyes was the curse of vices, and an enimie to vertue, he determined to sende him to the famous Academie of Salaâˆ£manca, with intent to haue him learne those sciences, which make men mount vppe to higher degrees then men, and so sent him thither indeede. But fifteene yeeres being nowe past since the death of his mother, it fell out that I going on a daie with others of our neighbours daughters to the market, kept in a prettie