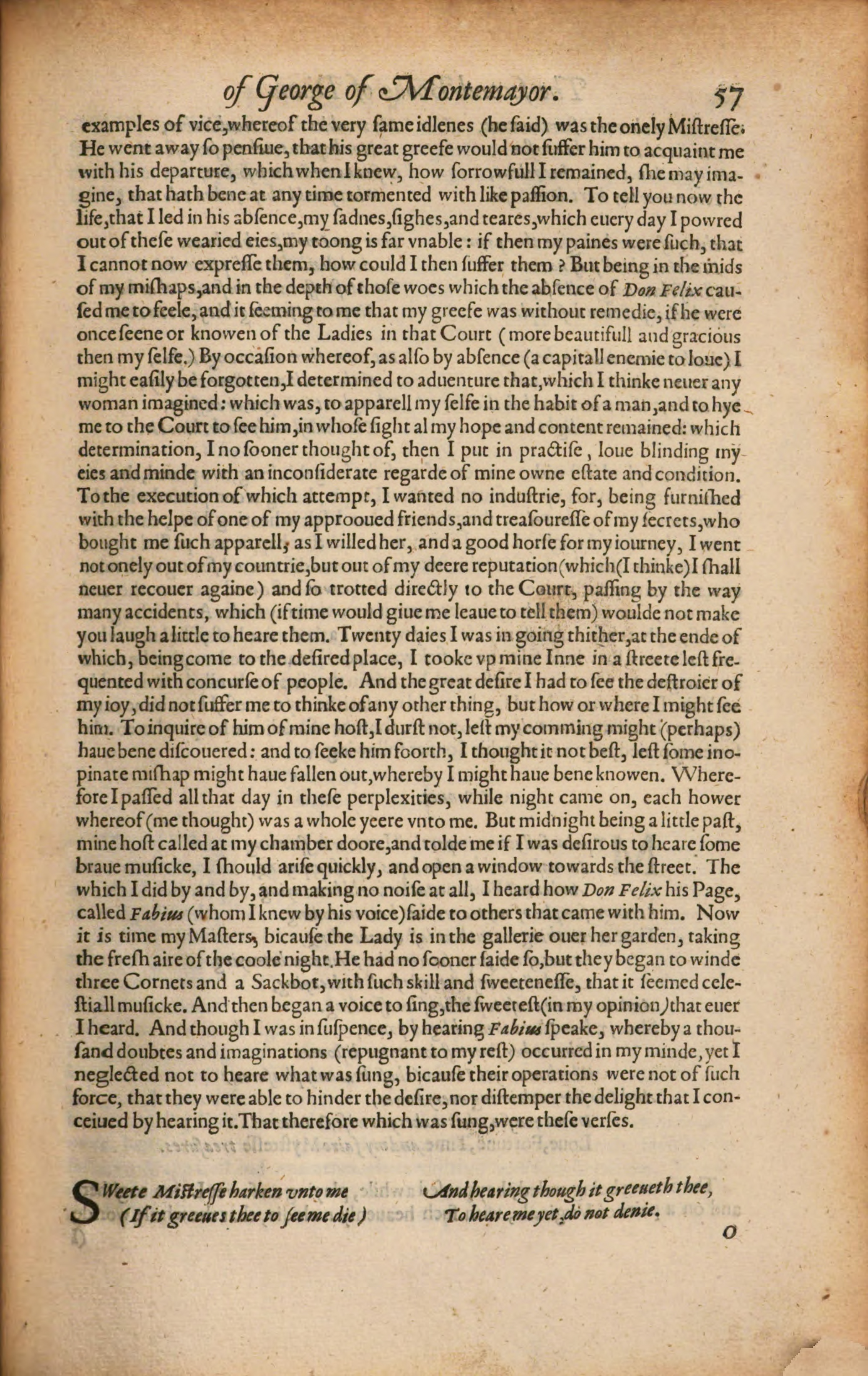 examples of vice, whereof the very same idlenes (he said) was the onely Mistresse. He went away so pensiue, that his great greefe would not suffer him to acquaint me with his departure, which when I knew, how sorrowfull I remained, she may imaâˆ£gine, that hath bene at any time tormented with like passion. To tell you now the life, that I led in his absence, my sadnes, sighes, and teares, which euery day I powred out of these wearied eies, my toong is far vnable: if then my paines were such, that I cannot now expresse them, how could I then suffer them? But being in the mids of my mishaps, and in the depth of those woes which the absence of Don Felix cauâˆ£sed me to feele, and it seeming to me that my greefe was without remedie, if he were once seene or knowen of the Ladies in that Court (more beautifull and gracious then my selfe.) By occasion whereof, as also by absence (a capitall enemie to loue) I might easily be forgotten, I determined to aduenture that, which I thinke neuer any woman imagined: which was, to apparell my selfe in the habit of a man, and to hye me to the Court to see him, in whose sight al my hope and content remained: which determination, I no sooner thought of, then I put in practise, loue blinding my eies and minde with an inconsiderate regarde of mine owne estate and condition. To the execution of which attempt, I wanted no industrie, for, being furnished with the helpe of one of my approoued friends, and treasouresse of my secrets, who bought me such apparell, as I willed her, and a good horse for my iourney, I went not onely out of my countrie, but out of my deere reputation (which (I thinke) I shall neuer recouer againe) and so trotted directly to the Court, passing by the way many accidents, which (if time would giue me leaue to tell them) woulde not make you laugh a little to heare them. Twenty daies I was in going thither, at the ende of which, being come to the desired place, I tooke vp mine Inne in a streete lest freâˆ£quented with concurse of people. And the great desire I had to see the destroier of my ioy, did not suffer me to thinke of any other thing, but how or where I might see him. To inquire of him of mine host, I durst not, lest my comming might (perhaps) haue bene discouered: and to seeke him foorth, I thought it not best, lest some inoâˆ£pinate mishap might haue fallen out, whereby I might haue bene knowen. Whereâˆ£fore I passed all that day in these perplexities, while night came on, each hower whereof (me thought) was a whole yeere vnto me. But midnight being a little past, mine host called at my chamber doore, and tolde me if I was desirous to heare some braue musicke, I should arise quickly, and open a window towards the street. The which I did by and by, and making no noise at all, I heard how Don Felix his Page, called Fabius (whom I knew by his voice) saide to others that came with him. Now it is time my Masters, bicause the Lady is in the gallerie ouer her garden, taking the fresh aire of the coole night. He had no sooner saide so, but they began to winde three Cornets and a Sackbot, with such skill and sweetenesse, that it seemed celeâˆ£stiall musicke. And then began a voice to sing, the sweetest (in my opinion) that euer I heard. And though I was in suspence, by hearing Fabius speake, whereby a thouâˆ£sand doubtes and imaginations (repugnant to my rest) occurred in my minde, yet I neglected not to heare what was sung, bicause their operations were not of such force, that they were able to hinder the desire, nor distemper the delight that I conâˆ£ceiued by hearing it. That therefore which was sung, were these verses.

And hearing though it greeueth thee,
To heare me yet, do not denie.