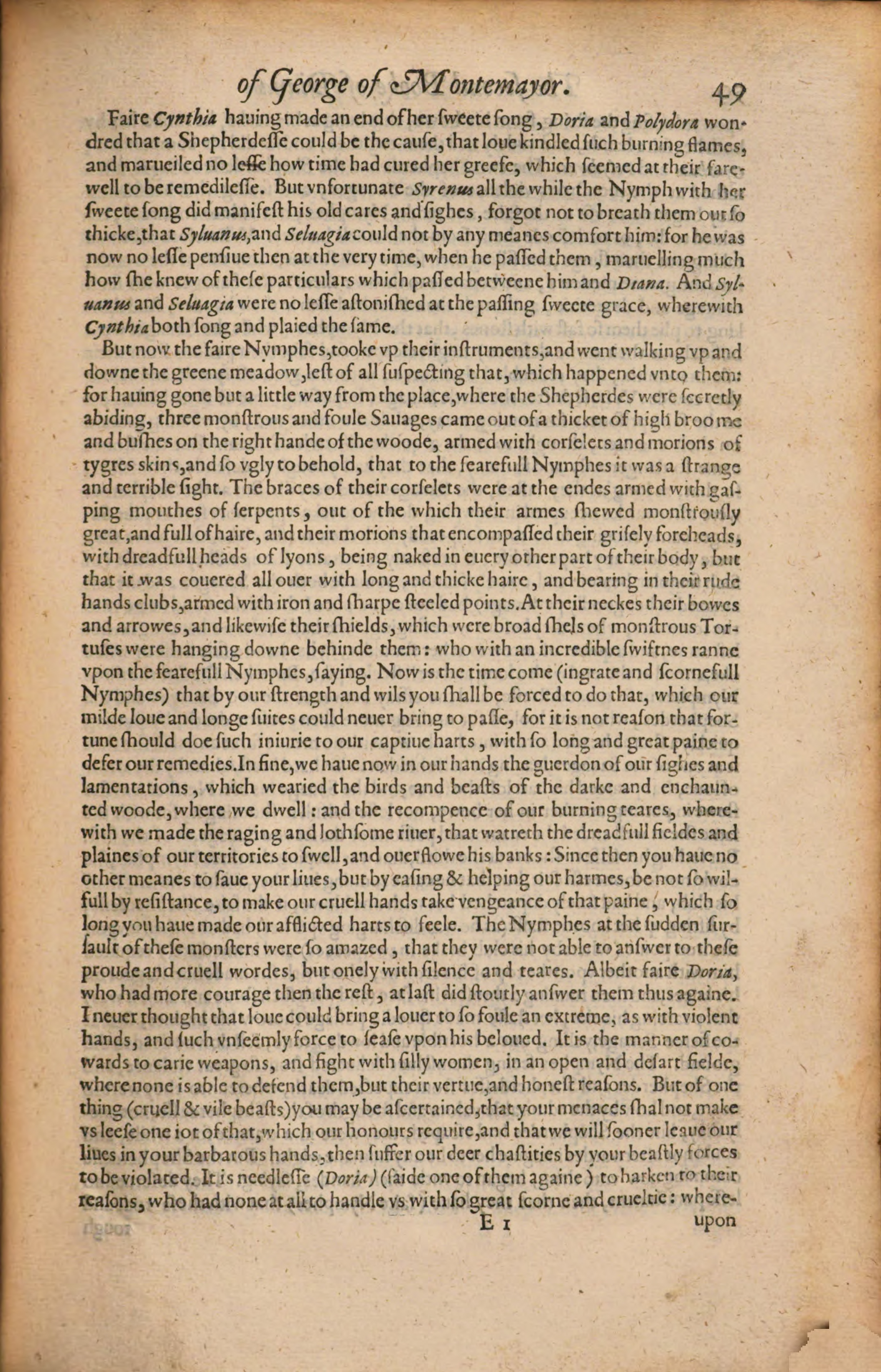 Faire Cynthia hauing made an end of her sweete song, Doria and Polydora wonâˆ£dred that a Shepherdesse could be the cause, that loue kindled such burning flames, and marueiled no lesse how time had cured her greefe, which seemed at their fareâˆ£well to be remedilesse. But vnfortunate Syrenus all the while the Nymph with her sweete song did manifest his old cares and sighes, forgot not to breath them out so thicke, that Syluanus, and Seluagia could not by any meanes comfort him: for he was now no lesse pensiue then at the very time, when he passed them, maruelling much how she knew of these particulars which passed betweene him and Diana. And Sylâˆ£uanus and Seluagia were no lesse astonished at the passing sweete grace, wherewith Cynthia both song and plaied the same.
But now the faire Nymphes, tooke vp their instruments, and went walking vp and downe the greene meadow, lest of all suspecting that, which happened vnto them: for hauing gone but a little way from the place, where the Shepherdes were secretly abiding, three monstrous and foule Sauages came out of a thicket of high broome and bushes on the right hande of the woode, armed with corselets and morions of tygres skins, and so vgly to behold, that to the fearefull Nymphes it was a strange and terrible sight. The braces of their corselets were at the endes armed with gasâˆ£ping mouthes of serpents, out of the which their armes shewed monstrously great, and full of haire, and their morions that encompassed their grisely foreheads, with dreadfull heads of lyons, being naked in euery other part of their body, but that it was couered all ouer with long and thicke haire, and bearing in their rude hands clubs, armed with iron and sharpe steeled points. At their neckes their bowes and arrowes, and likewise their shields, which were broad shels of monstrous Torâˆ£tuses were hanging downe behinde them: who with an incredible swiftnes ranne vpon the fearefull Nymphes, saying. Now is the time come (ingrate and scornefull Nymphes) that by our strength and wils you shall be forced to do that, which our milde loue and longe suites could neuer bring to passe, for it is not reason that forâˆ£tune should doe such iniurie to our captiue harts, with so long and great paine to defer our remedies. In fine, we haue now in our hands the guerdon of our sighes and lamentations, which wearied the birds and beasts of the darke and enchaunâˆ£ted woode, where we dwell: and the recompence of our burning teares, whereâˆ£with we made the raging and lothsome riuer, that watreth the dreadfull fieldes and plaines of our territories to swell, and ouerflowe his banks: Since then you haue no other meanes to saue your liues, but by easing & helping our harmes, be not so wilâˆ£full by resistance, to make our cruell hands take vengeance of that paine, which so long you haue made our afflicted harts to feele. The Nymphes at the sudden sur-sault of these monsters were so amazed, that they were not able to answer to these proude and cruell wordes, but onely with silence and teares. Albeit faire Doria,who had more courage then the rest, at last did stoutly answer them thus againe. I neuer thought that loue could bring a louer to so foule an extreme, as with violent hands, and such vnseemly force to sease vpon his beloued. It is the manner of coâˆ£wards to carie weapons, and fight with silly women, in an open and desart fielde, where none is able to defend them, but their vertue, and honest reasons. But of one thing (cruell & vile beasts) you may be ascertained, that your menaces shal not make vs leese one iot of that, which our honours require, and that we will sooner leaue our liues in your barbarous hands, then suffer our deer chastities by your beastly forces to be violated. It is needlesse (Doria) (saide one of them againe) to harken to their reasons, who had none at all to handle vs with so great scorne and crueltie: where-